Concurrency is when two or more tasks can start, run, and complete in overlapping time periods. Parallelism is when tasks literally run at the same time, eg. on a multi-core processor.

Writing correct parallel programs is challenging because of the subtle interactions between parallel components.

Bugs caused by these issues are difficult to find using testing, also difficult to debug because they may not be reproducible since they are usually load dependent. The overhead of communicating intermediate results between processors can exceed the performance benefits.

Try to work at a higher level of abstraction. In particular, know the concurrency libraries, don’t implement your own semaphores, thread pools, deferred execution, etc. (You should know how these features are implemented, and implement them if asked to.)

If you writing a mutable class, you have two options: allow the client to synchronize externally if concurrent use is required; or make the class thread-safe (synchronize internally). HashMap vs. ConcurrentHashMap.

If a method modifies a static field and there is any possibility that the method will be called from multiple threads, you must synchronize access to the field internally. Because this field is essentially a global variable even if it is private because it can be read and modified by unrelated clients.

Since Java 5, the platform has provided higher-level concurrency utilities that do the sorts of things you formerly had to had-code atop wait and notify. The utilities fall into three categories: Executor Framework; Concurrent Collections (especially BlockingQueue); Synchronizers (Semaphore, CountDownLatch, CyclicBarrier and Exchanger).

For interval timing, always use System.nanoTime rather than System.currentTimeMillis as System.nanoTime is both more accurate and more precise and is unaffected by adjustments to the system’s real-time click.

A hash table supporting full concurrency of retrievals and high expected concurrency for updates. However, even though all operations are thread-safe, retrieval operations do not entail locking, there is not any support for locking the entire table in a way that prevents all access. This class is fully interoperable with Hashtable in programs that rely on its thread safety but not on its synchronization details.

The following diagram illustrates the sketched situation. One thread running on the left CPU copies the shared object into its CPU cache, and changes its count variable to 2. This change is not visible to other threads running on the right CPU, because the update to count has not been flushed back to main memory yet. 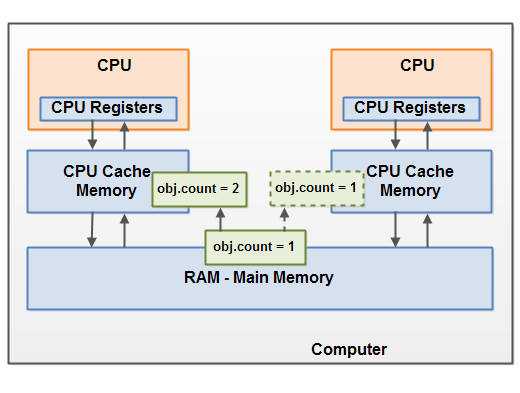 This diagram illustrates an occurrence of the problem with race conditions as described above: 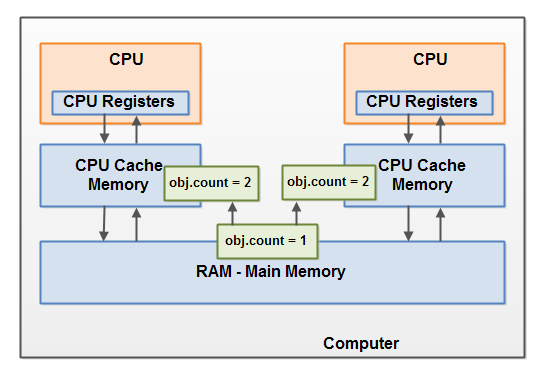 Do not use Thread.stop. A recommended way is to use a boolean flag with the volatile modifier, it guarantees that any thread that reads the field will see the most recently written value.

A semaphore is a very powerful synchronization construct, which maintains a set of permits. Semaphores are often used to restrict the number of threads that can access some resource.

Synchronization is not guaranteed to work unless both read and write operations are synchronized.

The following code shows: Threads t1 and t2 each increment an integer variable N times. What are the max and min values that could be printed by the program as a function of N?

Solution: Please note that the increment code is unguarded, which opens up the possibility of its value being determined by the order in which threads that write to it are scheduled by the thread scheduler.

The maximum value is 2N. This occurs when the thread scheduler runs on thread to completion followed by the other threads.

When N > 1, the final value of the count variable must be at least 2 because . There are two possibilities. A thread, call it T, performs a read-increment-write-read-increment-write without the other thread writing between reads, in which case the written value is at least 2. If the other thread now writes a 1, it has not yet completed, so it will increment at least once more.

The lower bound of 2 is achieved according to the following thread schedule:

Hint: The two threads need to notify each other when they are done. OddEvenMonitor is built as a Semaphore.

Identify a concurrency bug in the program below, and modify the code to resolve the issue.

The canonical way to avoid deadlock is to have a global ordering on locks and acquire them in that order. Since accounts have a unique integer id, the update below is all that is needed to solve the deadlock.

Consider an object s which is read from and written to by many threads. You need to ensure that no thread may access s for reading or writing while another thread is writing to s. (Two or more readers may access s at the same time.)

One way to achieve this is by protecting s with a mutex that ensures that two threads cannot access s at the same time. However, this solution is suboptimal, because no reader is to be kept waiting if s is currently opened for reading.

Here we can use a pair of locks – a read lock and a write lock, and a read counter locked by the read lock.

Based on above solution, the writer W could starve if multiple readers hold the access. How could we protects with “writer-preference”. i.e., no writer, once added to the queue, is to be kept waiting longer than absolutely necessary.

We achieve this by modifying above solution to have a reader start by locking the write lock and then immediately release it. In this way, a write who acquires the write lock is guaranteed to be ahead of the subsequent readers.

Consider a web-based calendar in which the server hosting the calendar has to perform a task when the next calendar event takes place.

We need a set of functions to manage the calendar and a background dispatch thread to run/delete the tasks. Therefore the two aspects to the design are the data structures and the locking mechanism.

We use two data structures. The first is a min-heap in which we insert key-value pairs: the keys are run times and the values are the thread to run at that time. A dispatch thread runs these threads; it sleeps (wait) from call to call and may be woken up if a thread is added to or deleted from the pool. If woken up, it advances or retards its remaining sleep time based on the top of the min-heap. On waking up, it will loop and peek for the thread (those runTime < currentTime) at the top of the min-heap, then poll and executes it in a thread pool. Meanwhile, use the next top thread’s run time to update the timer’s wake up time.

The second data structure is a hash table with thread ids as keys and entries in the min-heap as values. If we need to cancel a thread. we go to both min-heap and hash table to delete it. Each time a thread is added, we add it to the hash table and min-heap; if the insertion is to the top of the min-heap, we interrupt the dispatch thread so that it can adjust its wake up time.

Since the min-heap is shared by the update methods and the dispatch thread, we need to lock it. The simplest solution is to have a single lock that is used for all read and writes into the min-heap and the hash table. Or just leverage the concurrent package: PriorityBlockingQueue and ConcurrentHashMap. 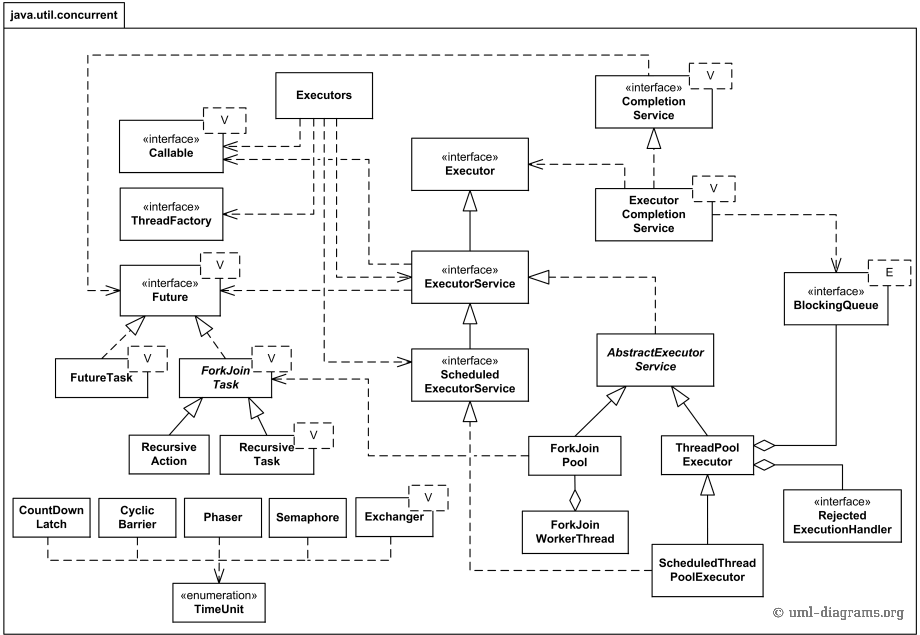 This package provides primitives for lock-free, thread-safe programming on single variables. While volatile provides only the communication effects of synchronization, this package also provides atomicity.

BlockingQueue implementations are thread-safe. All queuing methods achieve their effects atomically using internal locks or other forms of concurrency control.

Usage example, based on a typical producer-consumer scenario.

A ForkJoinPool differs from other kinds of ExecutorService mainly by virtue of employing work-stealing: all threads in the pool attempt to find and execute tasks submitted to the pool and/or created by other active tasks (eventually blocking waiting for work if none exist). This enables efficient processing when most tasks spawn other subtasks (as do most ForkJoinTasks), as well as when many small tasks are submitted to the pool from external clients. Especially when setting asyncMode to true in constructors, ForkJoinPools may also be appropriate for use with event-style tasks that are never joined.

You can submit two types of tasks: A task that does not return any result (an “action”, RecursiveAction), and a task which does return a result (an “task”, RecursiveTask).

Using a ExecutorCompletionService.poll/take, you are receiving the Future as they finish. Using ExecutorService.invokeAll, you either block until are all completed, or you specify a timeout.

CompletableFuture implemented the Future and CompletionStage interface. It is a building block and a framework with about 50 different methods for creating, composing, combining, executing asynchronous computation steps with a very comprehensive exception handling support.

CompletableFuture is to a plain Future likes what Stream is to a Collection.